Most of us have this one unfulfilled childhood dream. A few that I have heard are:

‘I want to grow up to be the richest man in my city!’ (typical unfocussed MBA)

‘I want to be Amitabh Bachchan.’ (all kids who didn’t really know what they wanted)

Anyone who knew my shy, reticent self way back in kindergarten knew that all I ever wanted was to be a writer. When I was in third grade, my poem got accepted to the senior school magazine. There was just one problem, no one believed that I wrote it. Sandy Kundra, the fat shy girl who walked into pillars with glazed eyes and didn’t display any academic brilliance could not have been spending all that time thinking. But I thought, read and imagined all the time-stories and characters would pour out of me naturally and finally, everyone had to accept it. I had a talent.

Of course that gave me tremendous self confidence which wasted no time in turning into arrogance. I couldn’t care less about things that I didn’t understand like profit and loss, mass and matter or the route from home to school. I knew I didn’t quite fit in the system and I didn’t care. The system just didn’t ‘get’ me-just the way it didn’t get all the truly greats-like Charles Dickens, Van Gogh and Jimi Hendrix. Oooh- it would be so unreal to be a part of Club 27!

Of course, my grounded, middle-class father wasted no time in bringing me down to reality. In his vision, unanimously shared across our  parent’s and teacher’s generation, the arts were for those who couldn’t get into science, you could not produce bread-and-butter by dreaming about them and those who scoffed the system were those who failed at it. My writing was good time-pass, it was not a self-sustaining career. In short, my talent was just a hobby.I was confused and needed ‘guidance’.

And so like a fat rat who knew he was going to be executed, I was pulled unwillingly through the sidelines and plonked in the middle of the race. Soon I was running in top speed just to keep in place. Very quickly I forgot my initial accurate apprehensions and started playing to win. Even though I wasn’t quite sure what the prize was. Somewhere while I was busy running, I shut off the spectators and the loud distracting noises long enough to realise one fundamental reality.

I hated this. I just didn’t fit.

From then on, my life was a series of ‘If only’ sentences. If only Papa hadn’t pushed me to do an MBA. If only I hadn’t cleared. If only I had the guts to stand up for myself. If only there was something creative about advertising biscuits. And somewhere I drew satisfaction that since I wasn’t leading the life ‘I was supposed to lead’, it was ok that I sucked at it. I didn’t top the MBA course because it wasn’t English Lit. I didn’t get into consulting because it wasn’t like writing for the New Yorker. My brand strategy wasn’t working because I still didn’t understand profit and loss. ‘If only’ became my safety net.

If only the system had allowed me to be a writer I would get published in an instant. My book would be famous and I would change the world in a way that generations would credit me for it. (No one can accuse me for not being ambitious). If only.

Someone up there must have got tired of my attitude. Soon life moved in a way that I couldn’t give any more excuses. I  had to abandon the system, the system changed and became much more accomodating, artistic talent wasn’t scoffed at anymore, IIT grads were writing books. And now people were calling my bluff. ‘Why dont you write?’ was a common refrain.

It is not easy to live up to your own expectations. What if your dream was just that- a dream? What if you really were not good at anything? What if your best isn’t good enough? It takes great courage to shed layers of protective veils that you have become accustomed to hide yourself behind.

I tried to write for three years. I wrote short stories that had very obvious climaxes. I wrote long chapters hoping to emulate authors that I could boast about liking-such as Ernest Hemmingway, Julian Barnes and Salman Rushdie. And when I read what I’d written, I’d promplty fall asleep.

People stopped asking me about my book and started asking me about my babies. I was at ground zero. So I gave up and decided to write from the heart. No one expected anything from me-even I knew I was just doing this to humour myself. I wrote and wrote till I had a manuscript. And on a lark I printed in out and send it to famous publishers whose addresses I’d downloaded from their websites. And then I sat tight and waited for the rejection slips.

For those who don’t know my book, ‘Burnt Toast’ got published last year. It has done decently well too. 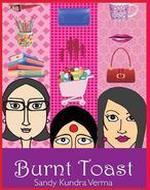 I had a talent. I was a writer.Which is not to say that all those who did get rejected don’t have any talent-remember the system just doesn’t get the ‘truly greats’. I am not one of those truly greats. Yet I was happy-over the moon actually. I am a writer.There was just one nagging question hovering around the periphery of my happy bubble.

Now, what? (image of me going ppphhht like an open balloon).

After working for the last six months, I have realised one thing. Writing your first book is easy. The book is about you, closely inspired by real life events and characters out of your life. (Mine was about the life and loves of three girls who had just ventured into the glam advertising world of Mumbai). In short, you don’t require much imagination. Expectations are low, you just want a decent publish. You don’t actually expect people to pay money to read it.

For your second book, you want the sky. You can’t write about your non-happening life anymore because frankly the juice has been squeezed dry. You now want to be the next Helen Fielding-notice no mention of Hemmingway. You want to change the world.

Give me a piece of your mind! Cancel reply